Theresa May was Britain's second female prime minister in July 2016. 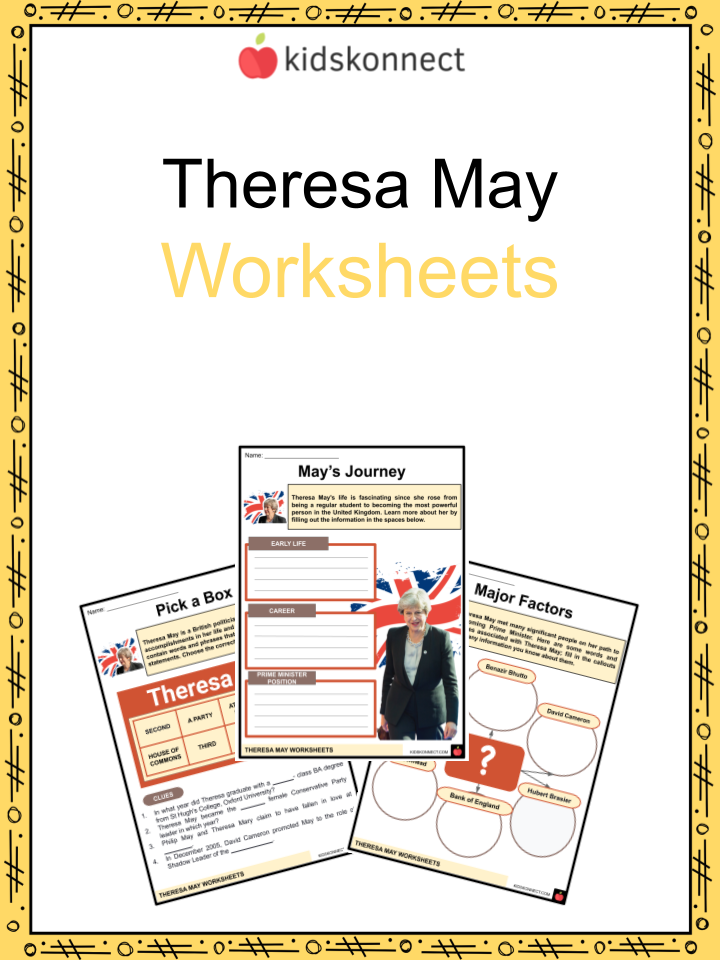 Theresa May is a British politician who became the country’s second female prime minister in July 2016 and served until 2019, succeeding David Cameron as Conservative Party leader. Her maiden name was Theresa Mary Brasier and she was born on October 1, 1956, in Eastbourne, Sussex, England.

See the fact file below for more information on Theresa May, or you can download our 22-page Theresa May worksheet pack to utilize within the classroom or home environment.

This is a fantastic bundle that includes everything you need to know about Theresa May across 22 in-depth pages. These are ready-to-use worksheets that are perfect for teaching kids about Theresa May, who was Britain’s second female prime minister in July 2016.

How Theresa May became Prime Minister?

May became the UK’s second female prime minister after Margaret Thatcher in July 2016, when David Cameron resigned and she was elected Conservative Party leader. May is the first woman to hold two of the most important governmental positions, the second being Liz Truss.

Why did Theresa May resign?

Theresa May resigned because she couldn’t get away for the UK to leave the European Union that Parliament would support. This caused a lot of political turmoil, as the government kept losing votes.

Can Theresa May be Primer Minister again?

The leader of the political party that has the most seats in Parliament is usually the prime minister. If one party gets more than half of all the seats in an election, then its leader becomes the prime minister. If no party wins a clear majority, it may take some time to figure out who will be the prime minister. This is because the parties may have to negotiate with each other in order to come to an agreement. Theresa May had an unsuccessful term. This means it will be difficult for her party to support her to become a PM again.