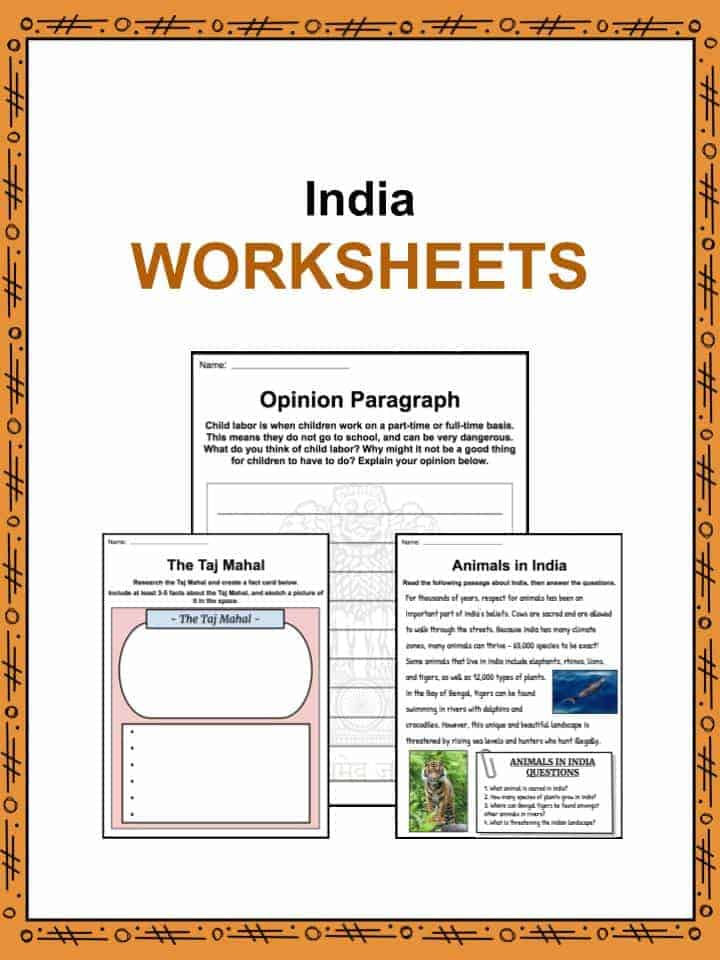 India, known officially as the Republic of India, is a country in South Asia. It is the seventh-largest country by area, the second-most populated country with over 1.2 billion people, and the most populated democracy in the world.

See the fact file below for more information about India or download the comprehensive worksheet pack which contains over 10 worksheets and can be used in the classroom or homeschooling environment.

Culture and Economy Of India

This bundle contains 11 ready-to-use India Worksheets that are perfect for students who want to learn more about India, known officially as the Republic of India, which is a country in South Asia.

Is India an exciting place to visit?

India is a country where many people of different languages, religions, and races live in harmony. India has many historical and spiritual places to visit, adventurous activities, and nearly 90,000 types of animals and 50,000 plant species making it a remarkable and exciting tourist destination.

The national flag of India is commonly called the Tricolor. It is a horizontal rectangular tricolor flag of deep saffron, white and dark green. The Ashoka Chakra, a 24-spoke wheel in navy blue, sits in the center of the white strip.

Which Indian dishes are famous worldwide?

Butter chicken and biryani are very well-known and popular Indian dishes served in all parts of the world. It is said that biryani has more variants than any other dish in the world.

Is India’s Taj Mahal one of the 7 Wonders of the World?

The Taj Mahal, also known as the Golden Temple, is indeed one of the seven wonders of the world. It is an immense mausoleum of white marble built between 1631 and 1648 in memory of Shah Jahan’s beloved wife, Mumtaz.

Are there beaches in India?

Much of India is surrounded by ocean, and parts of the coastline are scattered with beautiful stretches of golden sand. The best beaches can be found on the west coast, with Goa being a famous beach destination.